The story takes place in a world that is not ours.  The plot focuses on characters and political strife and discord.  There is usually an oppressive government and the main characters rebel.

This is another winning series by Lloyd Alexander and a good introduction to political fantasy.  Theo inadvertently broke a law and is on the run with a roguish doctor, his dwarf attendant and a street urchin of a girl.  The country of Westmark is unstable with the king ill, the princess missing and a power hungry Chief Minister wreaking havoc.  Alexander’s winkish humor is still present, plenty of action and wonderful characters.  The series examines the morals of war – when war is justified and also the damages of war.  The books are still available in paperback, hopefully will be available in ebook format.

Hilari Bell – The Farsala Trilogy:  Fall of a Kingdom (originally published as Flame), Rise of a Hero, Forging the Sword

The Hrum have already conquered 28 countries before arriving in the peaceful country of Farsala.   Three young people will play roles in the outcome of the impending war. Tones from Persian mythology color the series with reminders of the sweeping invasion of the Roman army.  Hilari Bell’s writing is full of adventure, intrigue and military strategy.  Excellent! 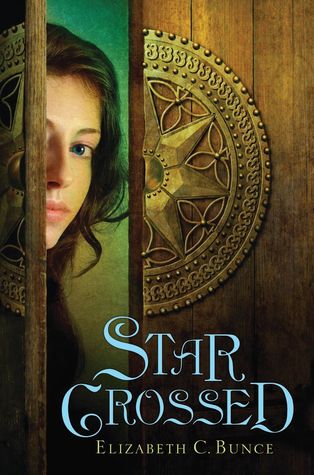 CIP Summary:  In a kingdom dominated by religious intolerance, sixteen-year-old Digger, a street thief, has always avoided attention, but when she learns that her friends are plotting against the throne she must decide whether to join them or turn them in.

I sure could have used a map on the end papers to better follow the story.  The lexicon of characters in the back is helpful.  The author has created a rich and detailed world and it took a few chapters to get a handle on the different factions.  However, once I got into the story, I engulfed the book.  Celyn/Digger is a down to earth, street tough girl with a hazy past and is the perfect character to build this world around.  I also enjoyed Prince Wierolf’s character – ah, the brave and dashing prince.   Star Crossed is reminiscent of Whalen’s The Thief, the first book in one of my favorite political fantasy series.  Best for avid political fantasy readers due to the many characters and factions.

Rae Carson – The Girl of Fire and Thorns

This could also be titled, The Girl with the Gem in her Navel.  Every 100 years, God bestows a godstone (gem) in the navel of an infant chosen to do something magnificently heroic.  Sure, that sounds a bit odd, but it works.  I immediately liked the godstone-bearing princess.  She is the second daughter of a king and finds herself betrothed and quickly married off on her 16th birthday, to a king that she has never met.  She is a pawn in the political game.  Both countries face the same adversary.  Princess Elisa starts out rather overweight , apathetic, and not comfortable with her role as godstone bearer and not at all sure of her relationship with her handsome new husband.  However, around every corner she finds her life and the lives of her friends, threatened.  She rises to the challenge every time.  Plenty of betrayals spice up the action-packed novel full of kidnapping, rebellion and fighting.  This is the first in a planned trilogy and I will eagerly read them all!

Some people are born with Graces.  Katsa’s Grace is killing.  She is forced to work as an assassin for her uncle, the king.  She teams up with prince from another land who is also skilled at fighting to work against the evil king.  I was so eager to continue the story of Katsa and was thrilled to begin reading Fire.  But no, Fire is a companion to Graceling.  Same land, different characters.  And every bit as compelling.  Fire is incredibly beautiful, beguiling men who see her.  Her Grace lies in the ability to control minds.  Fire is caught up in the turmoil of the country.  There is a bit of romance in both of these books that adds to the allure.  Well done!  I’ll be sure to read anything the author writes.  Bitterblue was published in May 2012 and continues with the story in Graceling and does tie  with Fire, however, the plot is rather predictable and doesn’t stand out as much as the previous books.

The story is told from both Hans’ and Raisa’s point of view.  Hans is a former street lord, surviving in the poverty stricken city.  He has had metal cuffs on his wrists since his birth.  He later learns that the cuffs inhibit his magic – yes, he’s an immensely powerful wizard to be.  Raisa is the princess heir of the Fells.  The queen is being manipulated by an evil wizard and arranges a marriage between Raisa and the wizard’s son.  The two characters meet in the first book, get to know each other in the second book when they go off to school, and learn each other’s true identities in the third book.  I got a galley of The Gray Wolf Throne at the Texas Library Conference and passed it from student to student with a long list of those clamoring to read it.  The books in the series are very difficult to put down.  Fast-paced, multifaceted characters and excellent storytelling will make this series popular for years to come.  We eagerly await the next book.

Many countries, each with vastly different cultures and religions, are in an uneasy peace.  To forge a more lasting peace, the young cultured and demure Princess Tashi is betrothed to the roguish Prince Ramil.  They take an instant disliking to each other.  While out on a ride to become better acquainted, they are kidnapped, causing both countries to prepare for war with each other.  But no, it is a third ruler who had kidnapped the couple who of course, come to care for each other.  That’s fine, it works for me!  The Glass Swallow is newly published as I write this and I have not had time to read it.

Another brilliant Australian author!  This epic fantasy is steeped in Asia folklore.  I’ve put it in the political fantasy section because the story is about political control of the country.  There is dragon magic and a strong heroine who must disguise herself as a boy because females are not allowed to use dragon magic.  This story line is extremely well thought out and unique.  It is finding a solid audience at my school and deservedly so.  Eona is every bit as good, hard to tell the summary without giving the plot away.

It was well worth the 16 year wait to read the final book in this series.  This is a much more detailed world than many of her other works and a more serious world.  We don’t have the subtle humor here.  There are gods, peasants, rulers, political strife, rebellion, and adventures.

Melina Marchetta – Finnikin of the Rock

Yes, another Australian author to follow.  Finnikin spent his childhood with the royal family, becoming friends with the royal children.  When he was still a child, the royal family was murdered and an imposter assumed the thrown.  People escape from the country to live as exiles in refugee camps.  Years later, Finnikin meets a young novice, Evanjalin, who claims she can lead him to the heir to the throne.  Can Finnikin unite the exiles and reclaim their homeland?  Riveting.  Best for older teens.

Robin McKinley – The Blue Sword (Newbery Honor), The Hero and the Crown (Newbery)

I read these books many years ago.  King Corlath discovers that Harry (female) has the power to wield the Blue Sword needed to save his country.  She trains to become a warrior and finds herself falling for her king.  The Hero and the Crown is the prequel to The Blue Sword and there are different characters.  Aerin must save her father’s kingdom.  Excellent characters and adventures.  So many cliff-hanging chapters.

This complex novel is translated from the German novel.  Two kingdoms have been at war for years.  The two kings meet in peace, or so they thought.  Young prince Florin finds it was all a ruse and his father has been put in chains in evil king Theodo’s dungeons.  Florin must apprentice with Theodo’s cruel court jester, Mimus.  Florin must learn his new role of court jester or his father will be killed.  Florin goes from pampered prince to half-starved court jester.  The story is rich and complex. I read this a few years ago, yet the story still lingers with me.  I hope more of Thal’s books will be translated into English.

Gen is a thief.  He comes from a long line of thieves.  Yet he ends up in prison after boasting about his skills.  Near death, the king’s magus releases him from prison if he agrees to steal Hamiatheses’s Gift.  This gem is from the gods and confers the right to rule the three kingdoms.  It has been lost for generations.  Gen, the magus, and the magus’s ward, Sophos, accompany Gen on the long journey across mountainous terrain.  Through tales that Gen and the Magus tell, Sophos and the reader learn the history of the three countries and their rulers.  The plot twists and turns with a heck of an ending.  The characters are the story.  Gen, well, he is amazing and complex and my hero.  I waited 14 years for the series conclusion and it was well worth the wait.  I have read the series twice, each time picking up more detail.  The author is genius.  I put The Thief on my school’s reading last year in an attempt to expand their interest into political fantasy.  This series is the absolute best when it comes to political intrigue and is my all-time favorite political fantasy series.