The Heart of Everything That Is: The Untold Story of Red Cloud, An American Legend – Bob Drury and Tom Clavin 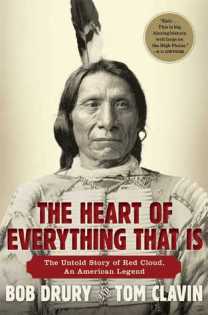 The Sioux called them Paha Sapa, the heart of everything that is, the center of the universe, a most sacred place. Today they are called the Black Hills. When treaty after treaty had been broken and these hills were threatened, Red Cloud had no alternative. The Lakota Sioux had to make a stand.
Red Cloud was an unlikely leader. He grew up fatherless, the son of a man disgraced by drinking himself to death. This was a handicap hard to overcome. But he was a natural leader and a brilliant tactician, eventually persuading the many tribal groups to fight as one, raising an army of over 3,000 Sioux, Cheyenne and Arapaho. He thus became the only Indian ever to cause the United States to sue for peace.

This book is carefully researched using, letters, journals, newspapers, magazines, and books to tell the story that we are accustomed to hearing, the story of the soldiers and settlers. The re-discovery of the little known autobiography of Red Cloud gives a rare look into this period of history from the Sioux point of view. The manuscript lay unnoticed in a drawer at the Nebraska Historical Society for almost a hundred years before it was finally published. If it were not for this autobiography, much of Red Cloud’s military prowess would not be known, since most of the time there were no soldiers left alive to tell the tale. It reads like an adventure story, not a history lesson, albeit a very gory, gruesome adventure story. The details of Indian mutilations are chilling and graphic. Not for those with a weak stomach. Once I got past the familiar early history of the United States’ Indian encounters and into the story of Red Cloud, I found the book hard to put down.