Into the Dim – Janet B. Taylor 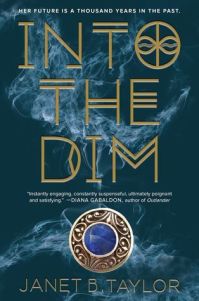 I feel like I have read more than the usual number of time-travel YA books lately.  This one is fine for middle school.   It is being hyped as Outlander for teens – no, not at all.  It’s time travel back hundreds of years to Great Britain and that’s where the similarity ends. It takes a bit of time to get going on the action but that’s okay.  This first book in the planned series sets up the characters and the time-travelling mechanism and history.  I did have some problems with the minutiae and the plot when they arrived back in time.  They got into the royal court far too easily.  The adventure picked up nicely with the requisite number of bad guys and good guys.  More than anything, one of my favorite queens in history, Eleanor of Aquitane, is introduced to this generation of readers.  I hope interest is peaked and readers continue to read about Eleanor of Aquitane and her importance in history.  One of my favorite books,  A Proud Taste for Scarlet and Minerva by E. L. Konigsburg would be an excellent follow-up.

This entry was posted in adventure, science fiction, Uncategorized and tagged Eleanor of Aquitane, time travel. Bookmark the permalink.