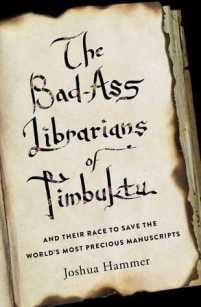 Timbuktu . . . the name evokes an inaccessible, mysterious place in darkest Africa. But it seems that in the fifteenth and sixteenth centuries it was quite accessible. Scholars from distant lands flocked to the city to study. It was a rich, lively place with more than a hundred scholastic institutions. Manuscripts were bought, sold and produced and most of them were beautiful with goatskin covers, inlaid with semiprecious stones, filled with fine calligraphy and complex geometrical designs. They contained not only religious scholarship but ethics, logic, medicine, history, poetry . . . every subject imaginable.

European historians claimed that black Africans were illiterate, with no written history. But Timbuktu proved the opposite.  Over the centuries these thousands of manuscripts were treasured by families and kept hidden. In 1964, UNESCO decided to create a center to recover this lost heritage and encouraged collectors to bring their manuscripts out of hiding. Understandably, things went slowly. People were afraid to relinquish their treasures. By 1984 only 2,500 had been acquired and Abdel Kader Hiadara was asked to help. Reluctantly at first and then with a passion he began to collect. Traveling up and down the Niger River and into the Sahara, he amassed a collection of over 350,000 volumes.

In 2012 as the Al Qaeda seized control of most of Mali and occupied Timbuktu, Haidara realized that his precious manuscripts were in grave danger. They couldn’t remain in the library, but the logistics and expense of moving so many fragile books secretly, was daunting. This is the amazing story of how he persuaded foundations around the world to help with finances, and persuaded ordinary people in his country to risk their lives for books.  Many have heard of Timbuktu, but I had no idea where Mali was, not a clue that such wonderful manuscripts existed, and hadn’t heard about the Al Qaeda takeover. This book contributed a great deal to my education. I did feel that there was a bit too much detail about the war, the battles, the troop movements. Over all, though, it was interesting, well-written, and most enjoyable.