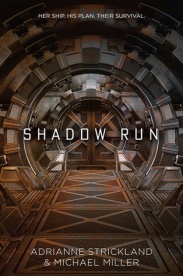 At 17, Qole is the youngest starship captain from the frozen planet of Alaxak.  She and her unique crew fish the systems for Shadow – sort of described as radiation.  It is a hazardous job and those working closely with Shadow die young.  Qole is unique in that she can actually harness the power of Shadow and use it as a weapon.  Nevarian Dracorte is a prince and heir to a huge part of the galaxy.  He is in disguise and on a mission to convince Qole to come with him to his home planet so they can better understand and exploit her abilities with Shadow.  Rival royal families also want Qole and are not above human experimentation to further their studies.  Capture, torture, escape . . . happens a lot in the story.

There is nothing new here.  The theme, plot, setting, and characters are all quite familiar to the avid reader.  Every crew member that Qole has gathered has hidden abilities and a mysterious past and are all quite likeable.  The reader will likely root for Nev as the well-meaning hero, but will shake their head at his naiveté and manipulation.  Chock full of fighting – hand to hand and all out war, this is best for readers eager for destructive action.