The Last Castle: The Epic Story of Love, Loss, and American Royalty in the Nation’s Largest Home – Denise Kiernan 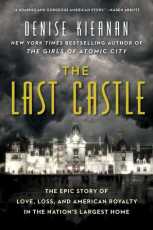 In 1888, George Vanderbilt, one of the richest men in the world, took his mother to Asheville, North Carolina, to breathe the mountain air and heal. He settled her in then went to see the magnificent views. The sight of Mt. Pisgah captivated him and that June he bought 661 parcels of land on her slopes. Very soon, he was adding to his real estate. It was not just a house he wanted, it was a different way of life, a retreat from the city, a life among trees, fields, streams, mountains. He would employ the best minds of his time to help him realize his vision – landscape architect Frederick Law Olmsted and architect Richard Morris Hunt.

Who would have thought that a book about a house could be so captivating. Well, for one thing it was not just a house. Biltmore Estate was a house of 175,000 square feet, on acreage three times the size of Washington D.C. Filled with art and antiques, it had its own little village outside the gates. This is the story of the people who lived there, the people who visited, the magnificent parties, the good times and the bad. It’s a little look into the lives of the ultra rich in the early Twentieth Century. And it is the story of how, eventually, the family struggled to maintain the very, very expensive castle.