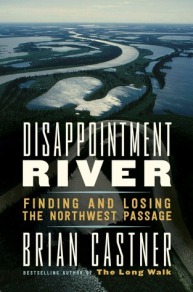 The indigenous people in the upper middle basin know it as Deh Cho. Those of the lower interior bush, the Nagwichoonjik, the Inut at the river’s end, the Kuukpak. All are a variation of Big River. It is the second longest in North America, eleven hundred miles. Today we call it the Mackenzie. The Northwest Passage, the water route through North America. It just had to be there, and the one who finally found it would be rich and famous. Alexander Mackenzie was very sure that the river described by the Red Knife Indians was the one. It was reported to be enormous and went forever into the setting sun. So the North West Company sent Mackenzie to lead an expedition. This is a fascinating book, for Brian Castner sets out to follow Mackenzie’s route in a two man canoe, and the chapters about Mackenzie are interspersed with descriptions of Castner’s trip. It’s a fine biography of Alexander Mackenzie, carefully researched and full of detail and it’s a great tale of adventure on an unforgiving river. Two books for the price of one . . . can’t beat that.