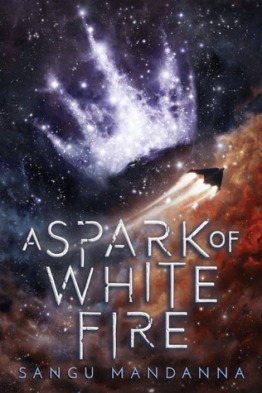 From the publisher: “The first book in a scifi retelling of the Mahabrahata.  When Esmae wins a contest of skill, she sets off events that trigger an inevitable and unwinnable war that pits her against the family she would give anything to return to.

In a universe of capricious gods, dark moons, and kingdoms built on the backs of spaceships, a cursed queen sends her infant daughter away, a jealous uncle steals the throne of Kali from his nephew, and an exiled prince vows to take his crown back.

Raised alone and far away from her home on Kali, Esmae longs to return to her family. When the King of Wychstar offers to gift the unbeatable, sentient warship Titania to a warrior that can win his competition, she sees her way home: she’ll enter the competition, reveal her true identity to the world, and help her famous brother win back the crown of Kali.

It’s a great plan. Until it falls apart.”

This is a good political sci-fi romp with plenty of action, dialogue, with a variety of characters.  However, the characters needed more depth, more of a backstory to better explain their actions and to engage the reader.  Perhaps that would have made the first book a bit too long.  My favorite parts were the interaction of the characters with the gods.  There aren’t many twists and turns in the plot.   Then again, there may be something up with Max because he is far too good.  This first book in the planned series sets up the war that is to come, despite the efforts for peace.

This entry was posted in science fiction, Uncategorized and tagged Mahabrahata. Bookmark the permalink.
Loading Comments...