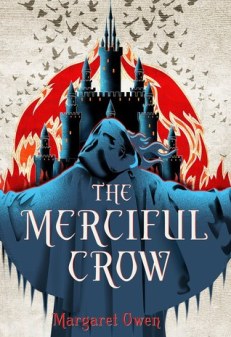 Fie abides by one rule: look after your own. Her Crow caste of undertakers and mercy-killers takes more abuse than coin, but when they’re called to collect royal dead, she’s hoping they’ll find the payout of a lifetime.

When Crown Prince Jasimir turns out to have faked his death, Fie’s ready to cut her losses—and perhaps his throat. But he offers a wager that she can’t refuse: protect him from a ruthless queen, and he’ll protect the Crows when he reigns.

Hawk warrior Tavin has always put Jas’s life before his, magically assuming the prince’s appearance and shadowing his every step. But what happens when Tavin begins to want something to call his own?

While the premise of the story is familiar – struggling lower-class heroine assists heir to throne, this story shines with the unique use of teeth as a source of power.  Fie is very likable and the reader quickly understands her problems.  The author addresses them and then we move on.  Good!  No need to repeat internal conflicts over and over. Fie has to get the prince and his bodyguard to safety.  For most of the book they are travelling across the country and trying to outrun the bad guys.  The plot moves at a brisk pace with the action and adventure of narrowly being captured many times over.   The first book in the planned duology is good and I am eager to read the sequel.

This entry was posted in fantasy, Uncategorized and tagged political fantasy. Bookmark the permalink.
Loading Comments...