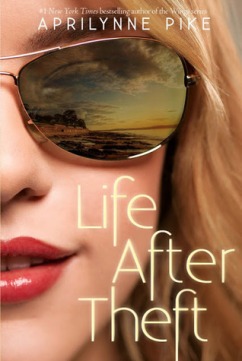 Jeff is new in town, so he assumes that practical jokes on the first day of school just come with the territory.  When he runs into a cute girl in the hallway who claims to be dead, the only explanation is a well-executed joke.  Kimberlee, the dead girl, follows Jeff around and slowly convinces him she’s not alive.  Jeff is the first person she’s been able to talk to in the year since she’s been dead, so she quickly recruits him for a favor.  She wants to move on from her ghostly state but can’t.  When she was alive, she had severe kleptomania, and now leads Jeff to a hidden cave filled with stolen goods.  As Jeff figures out how to return everything for her, they learn a lot about each other.  In the end, returning the items isn’t what helps Kimberlee move on. It is something much more poignant that Jeff is able to provide for her. This is a clever story with believable characters.  It will surely find a wide audience.

This entry was posted in paranormal, realistic fiction. Bookmark the permalink.