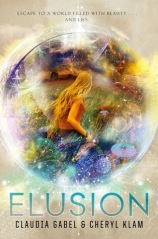 Regan’s father devoted his life to developing Elusion, a computer program that enables people to mentally escape from their polluted world to a pristine virtual world free of worries. His partner was boy genius, Patrick, who is Regan’s best friend. Regan’s world falls apart when her father is reportedly killed in an accident. Allegations are now being made that Elusion can harm users. New friend, Josh, leads Regan to question the safety of Elusion and Patrick’s motives. Regan strives to put together the clues left by her father to discover the truth behind Elusion. A blend of mystery, adventure, and future speculation, Elusion invites the reader into the virtual world to enjoy the sensations and cringe at the destruction.  The story ends abruptly so this is the first of a series that should be a hit with teens and a worthwhile cautionary tale.