1944: FDR and the Year that Changed History – Jay Winik 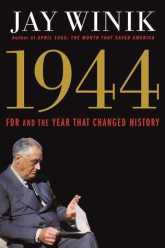 As 1944 began the Allies were rapidly preparing for Operation Overlord, the most important effort of the war. But just when Roosevelt’s leadership was needed most, his ever present energy and enthusiasm waned. He was only 62 and had always been an imposing presence, but now he was tired.  His color was bad, his hands shook, he couldn’t concentrate. He was a dying man.

I was mislead a bit by the title. I expected a detailed accounting of FDR’s actions and illnesses in 1944. Instead this was a nicely done history of WWII, with short bios of major players. Most of the focus was on the treatment of the Jews and how they could, or could not be helped. I had been under the impression that the allied powers were, for the most part, unaware that the Jewish people were being slaughtered. Not so. They just refused to believe the reports that were coming in, and when they finally accepted the unthinkable horror, they were unable to decide on a reasonable course of action.

This book provided me with much to think about. It’s easy to be wise, with the advantage of years of data examination. Hindsight is always very good, and decades of hindsight produce very good solutions to very hard problems. Still, one can’t stop wondering how things might have been different.

This entry was posted in adult, nonfiction and tagged 1944. Bookmark the permalink.