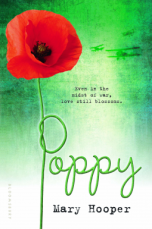 Poppy Pearson is a young maid in service to the aristocratic de Vere family during the outbreak of World War I.  Poppy is urged by a former teacher to take advantage of the expanding opportunities to women due to the war so she leaves her comfortable position to become a VAD nurse.  The Volunteer Aid Detachment was comprised of mostly women to aid nurses in tending the wounded soldiers shipped back to England and in the field hospitals.  Poppy is assigned to a hospital receiving wounded shipped back to England from the front.  She sees the physical and mental damages of war – faces destroyed, missing limbs, massive infections. Poppy tends to the soldiers with patience and kindness.  The atmosphere in the hospital wards is as positive as can be with the “Tommies” doing their best to have a cheerful attitude despite the horrific wounds.

Poppy was published in Great Britain in 2014, months before the 100th anniversary of the outbreak of World War I in August 1914.  Poppy is unique among the WWI historical fiction novels with the focus on the war effort at home and the contributions of women.  Through Poppy’s work with the soldiers on the ward, the advances in surgery like the facial reconstruction unit are described.  There was a glorification of the war and all strong young men were expected to enlist.  Poppy’s brother is among those who proudly march off to the front.  Letters from her brother show how extreme the conditions are at the front and the death everywhere.  He wants out so he shoots himself in the foot.  The war so horrific he would rather face a firing squad as punishment for his self-inflicted wound.

There is a bit of a polite Victorian romance between Poppy and the youngest deVere boy.  We see the strictly enforced class structure and how love may not win out over the matriarch’s wishes. Poppy and Poppy in the Field have already been published in Great Britain.  I hope these titles are well-received by American readers.  Mary Hooper is one of my favorite YA historical fiction authors and I look forward to reading the sequel, Poppy in the Field.  I do prefer the British book covers much more than this American version. Highly recommend.

This entry was posted in highly recommend, historical fiction and tagged 1914, England, nursing, World War I. Bookmark the permalink.