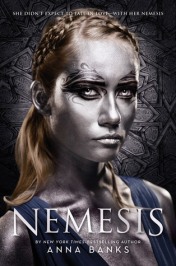 Imprisoned by her father, the King of Serubel, Sepora escapes with the intention of hiding among the laborers in the nearby kingdom of Theoria.  She is the last of the Forgers and has a skill sometimes inherited through the royal line that produces a buildup of energy and is expelled as spectorium.  It is so rare, that Serubel has built their economy around the trade of spectorium.  Her father has been forcing her to produce spectorium and plans to use this to conquer neighboring countries.  By escaping, she hopes to prevent war.  Soon after fleeing the lush and mountainous Serubel, Sepora is captured in the arid desert of Theoria and sold in the slave market.  She is bought as a gift to the new king of Theoria, Tarik, to be the most recent addition to his harem.  This does not sit well with Sepora, who gains the attention of Tarik.  The late king of Theoria died quite suddenly of a strange plague that is beginning to spread and Tarik enlists Sepora’s help without knowing her royal lineage.  Healers have determined that injecting victims with a bit of spectorium will fight the plague, but there is a massive shortage of spectorium.

We all see where this is heading.  And that’s okay!  Following the familiar plot line of enemies falling in love, there is nothing spectacularly new here.  However, Nemesis is quite good.  The characters, setting, action and romance all move along briskly to make for a good young adult political fantasy.  The chapters alternate between Sepora and Tarik, but it seems awkward because Sepora’s chapters are in first person while Tarik’s chapters are in third person.  I’d rather read in first person for both main characters.  Ignore the cover that looks rather alien and not at all what I envision Sepora looking like and plunge right into the story.  I eagerly await the sequel.

This entry was posted in fantasy, highly recommend and tagged political fantasy. Bookmark the permalink.