The Edge of Everything – Jeff Giles 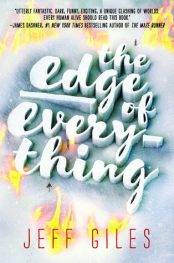 Zoe lives in an isolated cabin in Montana where the winters can be brutally cold.  During a blizzard, she finds her little brother almost frozen and they take shelter in an abandoned cabin where an elderly couple was murdered.  The murderer returns and it looking bad for them when a mysterious boy appears with the powers to drag the murderer to the Lowlands/Hell.  True love interferes and the boy ends up at Zoe’s cabin where her mother is rather anxious.  Zoe names him X, because he has no name.  He is a bounty hunter from the Lowlands for all eternity.  X violates rules so the masters of the Lowlands come for him and threaten those he now cares about.

This plot moves along briskly with plenty of action to spike the scenes.  We feel for Zoe’s family – dealing with the loss of their father who is presumed dead in a caving accident.  Banger and Ripper are two Lowland Bounty Hunters sent to the Lowlands for their own evil, but it seems they have turned a leaf.  Can they ever earn their way out of the Lowlands?  Probably not.  The premise of the story is a bit disconcerting since X is bound to the Lowlands when he has not done anything evil to deserve an eternity there.  There is a power above the Lowland masters that must be just as cruel to keep X in the Lowlands to be continually tortured and tested.  Still, this is a good read and teens will likely devour.

This entry was posted in horror, mystery, Uncategorized. Bookmark the permalink.
Loading Comments...