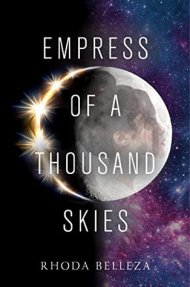 In this science fiction political thriller, Crown Princess Rhee’s family is murdered when their space ship is blown up.  Rhee is raised an a planet away from the seat of the Empire and is to return when she is sixteen to claim the throne.  The day has come and off she travels back to her home planet.  Rhee is rather naive in not considering whoever was responsible for her family’s murder might try to have her killed as well.  Fortunately, she has had years of combat training and doesn’t die during the assassination attempt en route.  She did have unexpected help in the nick of time when Dahlen, a member of a religious order on another planet, comes to her aide and thwarts the attack.  The two begin a hazardous journey across the Empire to find safety and regroup, but first she seeks revenge on the one she blames for her family’s death and her assassination attempt.

Meanwhile, the empire has broadcast Rhee’s supposed death when her transport ship explodes.  Aly, a pilot in the military and star of a reality show, is blamed for the princess’s murder.  He has a bounty on his head and must run.  He never is quite clear on why he was blamed, but then he seems in the dark on rather alot as the plot twists and turns and tumbles poor Aly along.  There’s a whole lot of scheming going on when Rhee’s usurper plans to reignite the war her father worked so hard to end.

An absolutely excellent read!  Adventure and plot twists abound in this war-torn galaxy of political scheming.  Rhee makes plenty of mistakes and that’s normal – she’s only sixteen and in way over her head.  Aly also stumbles around just like the reader, never quite knowing who to trust.  This is a solid adventure/mystery/sci-fi romp for any tween or teen looking for a brisk and twisty tale.  Highly recommend!