The Oceans Between Stars – Kevin Emerson 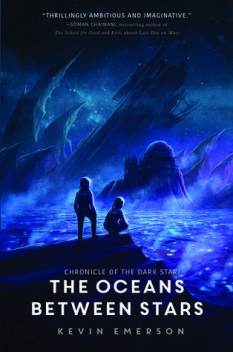 From the publisher, “It is Earth year 2223, but the Earth, along with the entire solar system, is gone.

Liam and Phoebe, having barely escaped our exploding sun with their lives, are in stasis for the decade-long journey to the rogue planet Delphi, where they hope to meet up with the rest of the human refugees, find help for their injured parents, and pass along the devastating things they discovered on Mars: that someone destroyed their world intentionally, and that that someone might still be after them, trying to finish the job.

Phoebe is carrying her own dark secret. One that finds her waking up secretly at various points in their journey, changing their path through space. One that will decide the fate of the human race, and many more besides. One that, very soon, she must reveal to Liam, whether he’s ready for the truth or not.”

This book follows the fantastic, Last Day on Mars, that must be read first.  Interdimensional travel can get a bit confusing as it is.  Phoebe’s secret past is revealed in the early chapters.  She deals with her moral conflict throughout their journey and rightly so.  Her character is perfectly complex.  Meanwhile, Liam is just plain fun to read.  Grit and determination combined with fast thinking helps him through situation after situation that would have been an end to anyone else.  The fate of the entire universe appears to be squarely on his shoulders.  This sequel is an exciting ride that continues this brilliant contribution to YA science fiction.  Highly recommend!