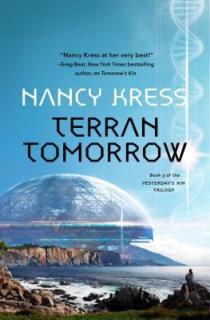 The spaceship Return carried only nine people, although it could have carried many, many more. The mission from Earth to World had not been a success, and so some of the Earthlings were going home, accompanied by five Worlders. They had no idea just what they would find on their arrival. After all, even though only a short time had elapsed on World, the transit through space would mean that twenty-eight years will have passed on Earth. The Earth to which they returned was profoundly changed. The spore cloud had killed most of the humans. Only a few million scattered survivors were left and they were waging war on one another. The new arrivals were soon joining the effort to end the deadly plague. I have always enjoyed Nancy Kress, but I was a bit disappointed in this book. The plot was pretty obvious and the characters were mostly one dimensional. This is the third book in the Yesterday’s Kin trilogy, but it can be read as a standalone.