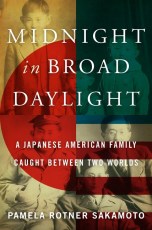 The Fukuharas were living a comfortable, middle class life in a small town near Seattle even though Katsuja and Kinu, who were born in Japan, were denied the opportunity to become American citizens and denied the opportunity to own property in America. It all came to an end when Katsuja died of pleurisy in 1932. As the depression deepened and the family’s funds ran low, Kinu decided the only thing to do was to move the family back to her home in Hiroshima. The children, born in America, growing up as typical American kids, were not happy. Harry, the second oldest son, declared he would go only with the assurance that he could come back if he didn’t like it. Predictably, Harry didn’t like it and returned to America in 1938 when he was 18. During WWII, Harry became an interpreter for the U.S. Army while his three brothers were drafted into the Japanese Army.

This is a wonderful book, carefully researched in two countries and filled with interwoven stories of the family members. It reads like a novel, but every word is true, telling of the hardships of the family in America and in Japan and of their will to survive, to be united once again. I highly recommend it, and it is suitable for teens.

This entry was posted in adult, biography, history and tagged Japanese-Americans, WWII. Bookmark the permalink.