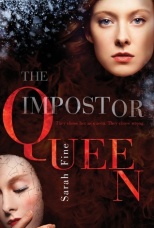 A careful balance of ice and fire magic has protected the Kupari people for generations through the queen, who reigns until the magic kills her.  Upon the queen’s death, the girl in training becomes the new queen when all of the magic enters her.  Then the search is on for the next young girl in training, designated by a special mark that appears with the death of the queen.  This is Elli’s story.  She has been raised by elders for many years and prophesies have foretold she will be the most powerful queen ever.  The queen dies abruptly and the elders take Elli to the chamber where the magic is supposed to enter her.  Nope.  Nothing happens.  The elders torture her, hoping the strong emotion and pain will awaken the magic.  Nope.  When the elders decide to kill her so the cycle of magic can continue with the next little girl, Elli escapes.  Badly beaten and near death, she is rescued by a band of refugees.  She learns that so much she was told was a lie.

A range of characters populate the book.  Some so very good and self-sacrificing while others were lured to the evil dark side, so power hungry.  Elli is a character to root for and of course Oskar who battles the ice magic within him and rescuer of Elli.  The story is told at a good pace, with enough detail and world building to draw the reader in.  This is the first in a planned series and I hope that Oskar’s sister Freya has a larger role in the coming books.  It should be quite popular among teens who want a strong heroine and a touch of romance.

This entry was posted in fantasy. Bookmark the permalink.
Loading Comments...