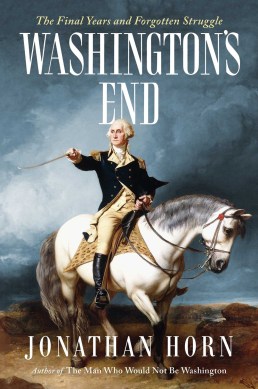 When he left office in 1797, George Washington planned to stay busy with “rural amusements.” But it was not to be. He was in debt. The farm was a money pit. He needed to rid himself of his many slaves, but could not because they belonged to the estate of Martha’s first husband. He found himself in the midst of quarrels between the Federalists and Republicans. Then, when the relationship with France became ugly, John Adams decided the country needed an army and it needed Washington as commander in chief. So much for his plans for a quiet, rural retirement.

This was an interesting look at the personal Washington, not General, not President. Using many primary sources, including letters, diaries, newspaper accounts, it tells of his relationships with friends and family, of struggles with problems on the plantation. It shows us the man with all his flaws. I enjoyed the book and recommend it. 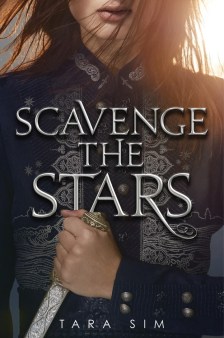 Amaya was sold to a debtor ship filled with children conscripted to pay off familial debts.  She spent 10 years diving for pearls, gutting fish, beaten and starved until she escaped.  With the help of Boon, a man she saved from drowning and who later saved her, they plot revenge to those that wronged them.  A primary target is the wealthy merchant and owner of the debtor ship whose son, Cayo, is to be used in the plot to destroy that family.  The plot gets a bit twisty.  We delve into Cayo’s backstory and of course discover he’s a likable though troubled sort.  This first book in the planned duology wraps a few things up, but all the players are in place for the next book.

Maybe I’m just drawn to books about plotting and revenge but it seems there are lots out there.  This one is good, the writing is well done, briskly paced, never plodding.  The bad guys are bad while the good guys are often in a state of puzzlement.  This reinvention of Count of Monte Christo is an engaging read and I look forward to reading the sequel.

Educated for Freedom: The Incredible Story of Two Fugitive Schoolboys who Grew Up to Change a Nation – Anna Mae Duane

In the 1820s most Americans did not see a need to educate black children. Reading, writing and a bit of math would do very well. After all, these children were seen as inferior. But the people who established the New York African Free School system saw things differently. This is the story of two boys who became friends at the Mulberry Street New York African Free School: James McCune Smith (1813-1865) and Henry Highland Garnet (1815-1882). Smith became a physician, graduating from the University of Glasgow in Scotland, becoming the first African American to hold a medical degree. He worked for the abolitionist movement from within, quietly using his medical education to show that blacks were not at all inferior. Garnet became a minister and an eloquent passionate speaker who was able to move hearts and minds. The two friends disagreed, often violently, on the best way for blacks to attain true freedom. In an era where most saw only two options for freed slaves, continued subjugation or return to Africa, these two childhood friends sought a better solution.  This is an amazing story.  That the sons of enslaved mothers could become well-educated and successful in influencing public opinion through writing books, speaking before adoring crowds, even speaking before Congress, during this time period is a monumental achievement.  I highly recommend this book.

The Journey to the Mayflower: God’s Outlaws and the Invention of Freedom – Stephen Tomkins

This year, 2020, marks the 400th anniversary of the sailing of the Mayflower. That’s usually the beginning of the story. But the story begins in 1553 with Queen Mary’s cleansing of the church. No, it really begins several hundred years before that. This story encompasses the beginnings of the Church of England, Presbyterians, Congregationalists, Baptists, and of course the Puritans. It is a history of oppression and intolerance.  This is a difficult book to read, quoting many early tracts and books. There is way too much information, too many sects with too many rules, too many preachers, too many people who died for their faith. It would be useful for scholars, but it is not for the casual reader. 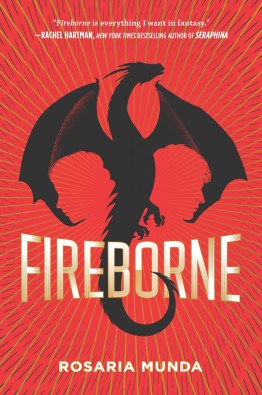 From the publisher, “Annie and Lee were just children when a brutal revolution changed their world, giving everyone—even the lowborn—a chance to test into the governing class of dragonriders. Now they are both rising stars in the new regime, despite backgrounds that couldn’t be more different. Annie’s lowborn family was executed by dragonfire, while Lee’s aristocratic family was murdered by revolutionaries. Growing up in the same orphanage forged their friendship, and seven years of training have made them rivals for the top position in the dragonriding fleet. But everything changes when survivors from the old regime surface, bent on reclaiming the city. With war on the horizon and his relationship with Annie changing fast, Lee must choose to kill the only family he has left or to betray everything he’s come to believe in. And Annie must decide whether to protect the boy she loves…or step up to be the champion her city needs.

From debut author Rosaria Munda comes a gripping adventure that calls into question which matters most: the family you were born into, or the one you’ve chosen.”

This extremely well written political fantasy offers a study of regimes.  When one regime is overthrown, will the next one be any better?  Is the new government really for the people or is it creating a whole new set of class struggles?  The characters of Annie and Lee are fantastic.  Annie begins rather timid, lacking confidence and we see her grow into leadership.  Lee begins with royal confidence, despite witnessing his family slaughtered.  As his beliefs falter due to conflicts between lineage and the present, we see his confidence diminish.  Engaging, thought provoking, true characters – all of them, this book has it all! AND DRAGONS! I am eager to read more from this author.  Highly recommend!

Voyage of the Frostheart – Jamie Littler

r, “In a snow-covered land where monsters rule the icy tundra, only song weavers hold the power to control these vicious giants. But for centuries song weavers have been the subject of suspicion—how can those who hold so much power be trusted?

Ever since his parents were lost on a pathfinding expedition, Ash has spent his life as an outcast. As a budding song weaver, his village marked him as a potential threat, even though all he wants to do is protect them. Eager to find his place in the world, he and his cantankerous yeti caretaker seek passage on the Frostheart: a ship-like sleigh whose mission is to explore faraway lands. There he meets a fast-talking, spunky navigator, a walrus captain with a peg leg who runs a tight sleigh, and a mysterious traveler who encourages him to hone his song. But can Ash’s song weaving save the Frostheart from the monsters hiding under the ice? Or will his untamed powers put his newfound friends in jeopardy?

Chockfull of heart and humor, as well as Jamie Littler’s irresistable illustrations, the journey of the Frostheart will win over readers and gatekeepers looking for a rich, gateway fantasy read.

As an adventure story for the elementary age kiddos, this was a bit plodding.  The story seemed overly long in the village before he is exiled.  Once they boarded the Frostheart, the story picked up with the action of plenty of near misses.  I don’t know how kids will react to the continual passages regarding Ash’s training and learning to “sing”.  Best character is the yeti guardian. 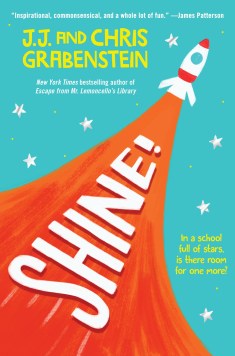 From the publisher, ““Who do you want to be?” asks Mr. Van Deusen. “And not when you grow up. Right here, right now.”

Shine on! might be the catchphrase of twelve-year-old Piper’s hero—astronaut, astronomer, and television host Nellie Dumont Frisse—but Piper knows the truth: some people are born to shine, and she’s just not one of them. That fact has never been clearer than now, since her dad’s new job has landed them both at Chumley Prep, a posh private school where everyone seems to be the best at something and where Piper definitely doesn’t fit in.

Bursting with humor, heart, science, possibilities, and big questions, Shine! is a story about finding your place in the universe—a story about figuring out who you are and who you want to be.

This quick read is made for middle schoolers.  Piper’s father is the new choir director at an elite school so Piper has to leave her friends and start over at this school full of snobby kids.  But not all the students are haughty.  She quickly finds a group of supportive friends, each with their own interests.  Her interest is science and her specialty is kindness.  Piper is a good all-around kid who enjoys science. While she may not have the musical abilities of her parents, her kindness shines through.  Nice read.